Retail demand is sluggish, as supplies across the industry remain ample. Recent drops in the shell egg market will bring relief to the higher egg costs. (.40/dz decrease is equal to 6.00/case on 15 dozen)

The Mahi-mahi fishing is going through off-season in South America. The 2021/22 catches are dismal and below average, resulting in higher raw material costs with reduced landings. 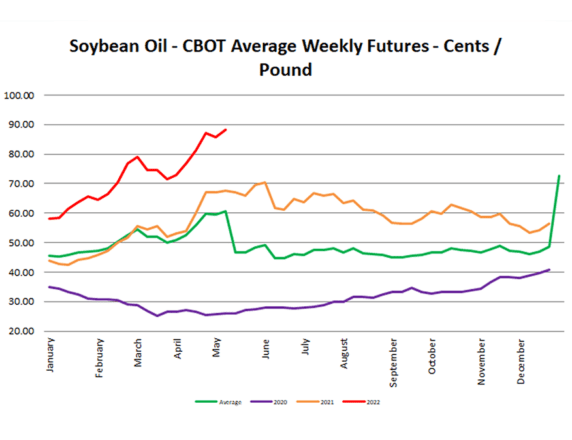 Production has been constrained from lighter bird weights and lower bird placements. Wings mostly steady on jumbo, lower on medium and small, while still being the best value in the complex. Tenders availability is very tight with higher prices. The random breast market is historically high but price increases are slowing. As expected, butts are now trending up as Memorial Day approaches. Loins, as well, are continuing to trend upwards after a few weeks of concessions. Ribs remain flat for next week. Bellies saw a slight uptick for next week and should trade sideways. Market tones are overall steady from the prior week. Buyers looking for a hot ad for Memorial Day ahead have stepped in on ribs and strips; that said, buyers still seem content to buy hand-to-mouth and not get over extended. Tenders continues to soften with lack of demand till at least early June. Chucks and rounds have stabilized, as price points have attracted grinders. The cheese markets appear to have leveled out after being on a steady increase since December. Strong Exports have been driving this increase. Eggs continue to move higher with Avian Influenza with cage free eggs taking the brunt of increases. Butter markets were down with soft demand. Floods in the Red River region in Canada are keeping Some Canola crushers from shipping Canola, putting a lot of pressure on soybean oil and allotments on Canola due to serious supply constraints. A lackluster USDA report, last week, also supported soybean oil futures. Canadian crab cluster season has begun. 75% of the quota has already been caught in the Gulf of St. Lawrence. There has been some closures due to right whales showing up in fishing areas. Market indexes for groundfish are trending higher with active demand from both retail and foodservice.

Market is adjusting as supplies improve with domestic regions in production.

Expect shorter supplies and active markets for the next week.

Peppers are still very tight as new growing regions are waiting to get started on both the east and west coast, for red, green and yellow bell peppers.

Markets are mostly steady for this week, with some suppliers having shorter supplies than others.

Active markets on both commodity and value-added Brussels sprouts continue as supply out of Mexico remains low and full production on the Central Coast of CA is not in full production. Jumbo sprouts are very limited to not available for most suppliers this week

No change from the previous weeks. Shredded carrots, rainbow shredded carrots and 2 in peeled carrots are now short in supply in addition to shortages on snack pack and jumbo carrots out of California. Carrot sticks for some also remain a challenge with the main carrot processor only packing a 2-inch stick, instead of a 4-inch stick.

Cabbage- Napa and Bok Choy – Market continues to be active with less overall supplies available. Active markets for the next 2-3 weeks. On RED Cabbage, very limited supplies being reported on the west coast.

Active markets as suppliers are dealing with quality issues out of Oxnard CA and the start of the season in Salinas is still 3-4 weeks out.

Green Beans have transitioned into Georgia this week. Demand has decreased and the number of growers has increased. Market hasn’t stabilized yet. Mexico is finished. California green beans very short from the desert.

The onions markets are mostly steady in both Texas and California. Southern Cal has good demand, and the quality is fair to good. Texas supplies are light along with the demand. Central California looks to start potentially late next week.

Italian parsley is being challenged with quality issues causing lighter supplies and stronger markets. Heavy seeder is being seen for some suppliers.

Peppers are still very tight as new growing regions are waiting to get started on both the east and west coast, for red, green and yellow bell peppers.

Rounds, grapes, and cherries are currently on alert status due to low availability and strong demand. Central FL growing region is finishing a week early and the transition to Quincy, FL will be delayed by 1-2 weeks. Mexico is waning which will also continue to add to the active market conditions.

Mexico – Market is stronger as the growers leverage a limited harvest rate for higher field prices. Size curve is moving a bit larger allowing for 60’s to sell for nearly if not the same as 48’s. California – Harvest is peaking on 60ct. 85% of crop has been picked for the season.

Lemons: Market is steady. The crop is heavy to mostly large fancy grade. Small choice is lighter in supply and prices are steady.

Market is stronger as navels wind down. Volume is peaking on large fancy grade. Small choice grade 113-138 counts are very short in supply. Valencia’s are being used to fill in on small sizes. The full transition will take place over the next two weeks.

Lime: No issues with quality or supply on 175’s and smaller, still seeing very limited volume on 110’s/150’s . Do not expect volume on that size until late June.